Board games and indeed games of all types are a fantastic and fun way to educate children of any age and can be used to teach and improve a wide range of skills - maths, writing, art, logical thinking, planning ahead, general knowledge and of course, social skills. If you're feeling really creative, you might also think about how to invent or modify an educational board game to fit with your child's favourite characters from books or films, favourite hobbies, etc. If you scroll down, you'll find a couple of suggestions for popular board games.

The Da Vinci Board Game

We have also invented our own board game, The Da Vinci Game, which is available in retail outlets in the UK, Ireland, Australia and New Zealand. The Da Vinci Game, which is for ages 12 and up and is a thrilling board game using ingenious codes, riddles and logic problems, where one player or team ask the challenge and all the other players race to solve it. There's much more information about it on www.thedavincigame.com, including sample clues and more photos, or if you click the link on the left, this takes you to information on the background and inspiration behind the game.

We also highly recommend two board games (released in June 2009) the Liar Liar board game
(Ages 12 and up) and the Eurobabble Game (Ages 12 and up) by Pants on Fire Games. Liar Liar is a trivia game with a twist, where you can invent answers, lie about your die roll and even lie about knowing the answer, so long as you don't get caught.

The Eurobabble Game is a hilarious party game where players have to act in the manner of someone from a different European country, put on an accent (in French, Dutch, German, Italian, Swedish or Spanish), or guess what the answer is in English from a question in a different language. No actual knowledge of other languages is required, indeed Eurobabble is the most fun when you don't know the other languages! While the focus is on 'fun' rather than the educational angle, you'd also be surprised how much you pick up while playing it. 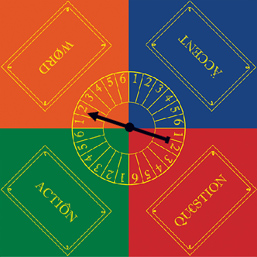 The table below shows two other board games which we recommend and suggestions for creative activities around each game.